IF I WERE A GOOD MAN, I'D WALK AWAY. PROBLEM IS... I'M NOT - TRUE BEGINNINGS BY AMANDA MACKEY 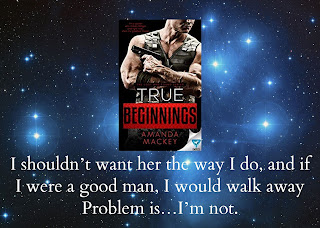 I’m addicted to it. War, battle—the thrill of being in mortal combat and constant danger. Not knowing whether I’ll still be breathing one moment to the next is a rush I can’t explain. But I hate that I love it. It’s like a sickness that sank its hooks into my psyche and refuses to let go. I’m living with nightmares and the strange reality of civilian life, while I crave my next mission. Until I meet a sassy redhead with sharp wit and scalding green eyes. She stirs the same adrenaline rush I experienced while dropping from the sky into enemy territory. Charlotte is everything that’s right in this wretched world. There’s a kindness in her, but I’m afraid the darkness lurking within me will destroy it. I’m not the kind of man she deserves. She’s too good for me. I shouldn’t want her the way I do, and if I were a good man, I would walk away. Problem is…I’m not.

5.0 out of 5 stars The soldier she loved to hate and hated to love
Reviewed in the United States on September 21, 2018
Format: Kindle Edition
WOW.. what a realistic story. Two soldiers, Declan/Dec and Viper, closer than brothers deal with PTSD while still taking on dangerous military missions. This is Viper's story. Viper is a physically fit, intimidating soldier. He butts head with Dec's woman's best friend Charlotte/Char. Every time they are in each other's company their animosity for each other erupts. When Char is robbed at gunpoint, her stern personality falls apart. Wanting to give Mac and Dec their privacy, she opts out to stay with Viper. She does not look forward to the confrontations nor does she have the energy to do so. Viper thinks he is out of his gd mind for letting her stay. When Char has a meltdown, Viper takes control and comforts Char. Over the next several days Viper continues to amaze Char at his sensitivity for her. Then Viper gets a call back to duty. Will Char get over the assault? Will Char and Viper ever have a truce? This book hit upon the subject of PTSD and hit a home run. When I got to the last page, I was not dissapointed. I do hope there is a sequel that moves forward with Dec and Mac, Char and Viper. I totally and whole heartily recommend this book. I received an Advanced Readers Copy of this book and am voluntarily leaving a review.
PAPERBACK
KINDLE